The instant I saw the New York Times’ piece on China’s “minority theme parks”—Disneyland-like affairs highlighting the culture of China’s 55 “ethnic minorities”—I  knew it would soon appear in the Chinese press. But how would it be reshaped to render it politically correct for the masses, I wondered? 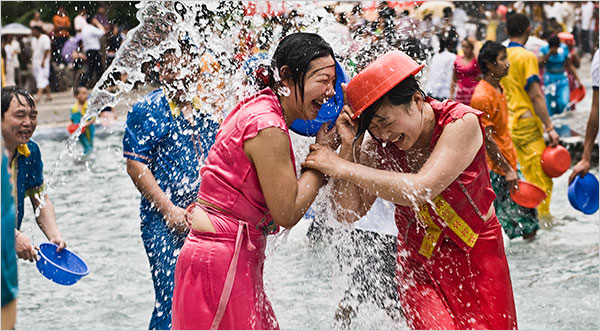 Quite differently than I expected, frankly. The report has been quickly translated and published by Cankao Xiaoxi (参 考消息). Cankao Xiaoxi is a respected and influential Chinese-language digest of the world press with a long history, and in many cities across China it sells out every day before noon. As noted in past pieces, virtually no English is used and little or no content is added. But references deemed unbecoming to China’s image are often “airbrushed.”

Predictably, text alluding to dissatisfaction among non-Han in the neighborhood has been deleted. So has a comment by a Dai bed-n-breakfast owner to the effect that some nearby Dai villages are “primitive.” But I’ve been reading Cankao Xiaoxi for over two decades, and I am surprised at how much of the original—some rather unflattering—has been left untouched this time around. For instance, the translated copy includes the fact that these parks are generally owned and run by Han Chinese, and sometimes Han even “dress up as natives.”

This bald statement from the original also appears faithfully translated in the Chinese:

The parks are money-making ventures. But scholars say they also serve a political purpose — to reinforce the idea that the Chinese nation encompasses 55 fixed ethnic minorities and their territories, all ruled by the Han.

To show you how censorship works in the People’s Republic,  the original article from the New York Times is fully reproduced below. Words that have been crossed out are those that were deleted from the Chinese version published in Cankao Xiaoxi.  Enjoy!

MANZHA, China — Tucked away in China’s steamy tropical southwest are the villages of the Dai people, famous throughout the country for a raucous annual tradition: a water-splashing festival where the Dai douse one another for three days in the streets using any container they can get their hands on — buckets, wash basins, teacups, balloons, water guns.

But in Manzha and four surrounding villages, the springtime festival has taken on added significance — or insignificance, depending on how you look at it. Imagine a nonstop Mardi Gras with fire hoses: at a site called the Dai Minority Park, water-splashing extravaganzas take place every day.

Yuppies from China’s boom cities arrive by the busload to take part in a wild frenzy of dousing and dunking and drenching with 100 Dai women dressed in bright pink, yellow and blue traditional dresses — “our warmest and sweetest Dai princesses,” as an announcer calls them.

“A lot of tourists want to come see this, but it’s only a few days a year,” said Zhao Li, one of the management office employees, who are virtually all Han, the dominant ethnic group in China. “So we decided to make it every day, so everyone can experience water splashing.”

The Dai park, with its wooden stilt homes, groomed palm trees and elephant statues, is part of an increasingly popular form of entertainment in China — the ethnic theme playground, where middle-class Han come to experience what they consider the most exotic elements of their vast nation. There is no comprehensive count of these Disneyland-like parks, but people in the industry say the number is growing, as are visitors. The Dai park, whose grounds encompass 333 actual Dai households, attracts a half-million tourists a year paying $15 each.

The parks are money-making ventures. But scholars say they also serve a political purpose — to reinforce the idea that the Chinese nation encompasses 55 fixed ethnic minorities and their territories, all ruled by the Han.

“They’re one piece in the puzzle of the larger project of how China wants to represent itself as a multiethnic state,” said Thomas S. Mullaney, a historian at Stanford University who studies China’s ethnic taxonomy. “The end goal is political, which is territorial unity. Parks like that, even if they’re kitschy, kind of like Legoland, they still play and occupy a political position.”

China’s 1.3 billion people are officially 96 percent Han; the rest range from Tibetans to Naxi to Manchus, categories fixed after the 1949 Communist revolution. The companies running the parks are generally Han-owned, say industry workers. The Dai park was started by a Han businessman from Guangdong Province in the late 1990s and sold to a state-run rubber company in 1999.

The most famous park, the Nationalities Park in Beijing, is a combination of museum and fairground. Ethnic workers from across China dress up in their native costumes for mostly Han tourists. (For a while, English signs there read “Racist Park,” an unfortunate translation of the Chinese name.) In some parks, Han workers dress up as natives — a practice given legitimacy by the government when Han children marched out in the costumes of the 55 minorities during the opening ceremony of the 2008 Summer Olympics.

Yunnan, in the southwest, is one of China’s most diverse provinces, with 25 official ethnic groups. The Dai, one of the largest, are related to the Thai. Many live near Laos and Myanmar in the region called Xishuangbanna.

Dai farmers grow rice and have rubber plantations in the hills. Even in the Dai park, most villagers still farm rubber for their primary income. The villagers also make some money from leasing the land on which they live to Ganlanba Farm, the state-owned rubber company that operates the park.

In exchange, they have to follow rules laid down by the rubber company managers — no significant changes to their stilt homes, for example. By contrast, some villagers outside the park use brick and concrete to build homes now.

About 500 residents work here and put on the daily show, including water-splashing festivals and dragon boat races, held on a nearby stretch of the Mekong River

Some tourists pay to sleep in family homes that stay true to Dai tradition.

“If you know how to run a business, you can benefit from the park,” said Ai Yo, a father of two who runs one of 27 official homestays. “But if you don’t do business, there’s no real benefit.”

Residents had become dissatisfied with the annual lease price for their land, he said. The rubber company was paying the villagers $73 a year per one-sixth of an acre. Only in recent months has the company agreed to pay about 20 percent more in rent.

Homestay owners have tossed out some traditions to meet the needs of Han tourists. The first tourists slept with their hosts on the floor of a large room, according to Dai custom, but visitors soon complained, Mr. Ai Yo said. So homeowners built separate bedrooms. Traditionally, too, the Dai were skittish about allowing strangers to look inside their bedrooms, because of a belief that the gaze of strangers would frighten away ancestral spirits.

Over all, though, he says tourism has bettered his life. “I had rice paddies, and I worked morning to night and didn’t seen any money,” he said while sitting outside his home one warm morning.

At another table outside were two Han tourists from the city of Chongqing. Zheng Jing, a big-bellied man wielding a Canon camera, was a repeat visitor. He said this park was the only place in the Dai region where he would ever consider staying.

“There are many villages around, and they’re all primitive,” he said as a Han motorcycle club pulled up to Mr. Ai Yo’s house for lunch. “It’s not suitable for us to go there. They don’t speak the Han language. You can’t have exchanges with them.”

That kind of attitude puzzles Dai residents living right outside the park.

“The culture here is the same as inside the park,” said Ai Yong, 32, a rubber farmer in Mannao village. “You’re getting cheated inside. You come out here, you can see everything for free.”